Posted at 15:21h in Senior Living by admin 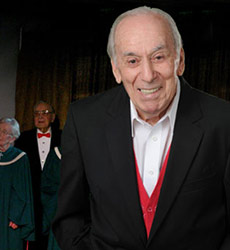 Though at first he promised himself not to take on the big job of producing another Park Springs Musical, especially since he recently turned 90 in August, Marvin Himmel, the charismatic and energetic director of six earlier annual shows at the Park Springs retirement community fortunately reversed his decision. He recently announced ‘Here We Go Again, Again!’ – a new show in a new format.

“We are turning the community hall at Park Springs into a Dinner Theater. I’ve worked closely with our fabulous Director of Food and Beverage, Jim Schneeberger, as well as Executive Chef Derrick Henry, to come up with an elegant menu, and we expect a capacity crowd on December 4, 5, 6 and 7. Dinner will start at 6PM, and our show will follow at 7:35PM. During dinner there will be music and ‘surprises,’ and then, it’s show time!” smiles Marvin.

This year’s cast will feature 25 returning veterans (17 have been part of these shows since Marvin started directing them in 2007) and four new faces. Twice-weekly rehearsals start on October 1, and Marvin promises that this year’s show will surpass all previous productions with new and creative lighting and special effects.

In total, more than 50 Park Springs members work on ‘Here We Go Again, Again!’ including lighting, costumes and make-up, scenery and props. “Every year, I am so proud of the quality of our production,” says Marvin, who reminds the members at Park Springs to make advance reservations for this year’s show as soon as possible “… because we will definitely sell out!”

Marvin, born and raised in Chicago, and his beautiful wife Maxine, who came from a tiny town (399 residents) in Nebraska, moved to Park Springs in 2004 from San Diego. “We were married for 65 ½ glorious years, and I miss her sparkling blue eyes. Fortunately, I now live close to our son, and am a proud grandfather and great-grandfather, including the children of our other son who passed away too young at 53.”

Performing is in Marvin’s DNA. At 9 years old, he started doing radio work and worked on kids’ shows like Skippy, Jack Armstrong, Little Orphan Annie, and Sky King. At 13, he was asked to join the touring company of ‘Dead End’ by Sidney Kingsley, and even though his father did not approve, he was won over when Marvin promised to come back in time to graduate. “I told him that I had just finished my bar mitzvah, and that he had raised me well,” remembers Marvin. “Being on the road for six months was a great learning experience.”

During WWII, Marvin served in the Air Corps. He requested to be an aerial gunner, but was put in Special Services because of his radio experience, and ended up running an Officers’ Club and NCO Club in Lincoln, Nebraska. “My piano player knew of this group of four pretty girls who worked at the NCO Club. We auditioned them and they were darn good harmony singers. My future wife Maxine was one of them. From then on, music and dance were always an important part of our life together.”

“Here We Go Again, Again!” will feature songs by old favorites such as The Four Aces, The Ames Brothers, the McGuire Sisters and Bette Midler. The show’s Broadway segment will include songs from top Broadway shows like ‘Ragtime’ and a special tribute to the 30th Anniversary of ‘Les Miserables.’

(Note: Look for more details on the upcoming show in a future blog!)